Reporting out of proportion

The Financial Times reports that «in many countries, these excess deaths exceed reported numbers of Covid-19 deaths by large margins» and shows graphs with peaks ways above the normal. However, putting this in proper context, changes the picture entirely.

I checked the data for Switzerland where FT states that the excess mortality is 27% above normal.

To put this data in perspective, we look at the graphs from the Federal Statistical Office depicting total deaths for the years 2020 and 2015.

An overlay using GIMP gives us this graph.

In other words: we have a classical peak that occurs during a strong influenza wave. Such peaks are a normal phenomenon every few years: 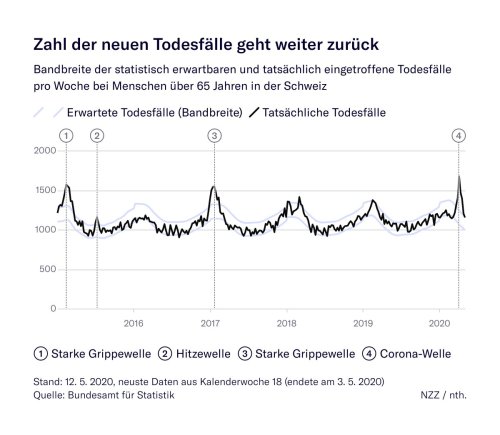 The regularity of the «excesses». Every few years a peak.

Using weekly excess mortality instead of the excess mortality over the entire year is misleading. Every few years there are «excesses» as we can see in the graph above.  This is a normal pattern. For a single week, we can measure an excess of 27%, 61% or even 451% above average but just a few weeks later the numbers come down. Over the year there will only be a marginal increase of a few percentages, e.g. in 2015 the total number of deaths was only 5.4% higher than in 2014 or 4.4% higher than in 2016. In a graph, the change in mortality rate is hardly visible.

Media reporting is in the full sense of the word out of proportion.

It was frightening to see how quickly the liberal left collapsed into totalitarianism when the causes for the measures were presented as being «compassion» and «care for the elderly and weak». As if compassion had any place in the neoliberal, capitalist economy and even less in US foreign policy (Iraq, Libya, Afghanistan, Syria, etc.).
It is also puzzling that the media reporting resembles in large parts Goering’s recipe for totalitarianism. ‘Being attacked’ is extended to ‘attacked by a virus’, and ‘the pacifists’ are replaced by ‘those who do not have compassion with the elderly’.

“Naturally, the common people don’t want war …. Voice or no voice, the people can always be brought to the bidding of the leaders. That is easy. All you have to do is to tell them they are being attacked, and denounce the pacifists for lack of patriotism and exposing the country to danger. It works the same in every country.”
– Herman Goering

Having a «war against the virus» — a war — makes airplanes honoring the soldiers on the ground (health workers) fit well into the picture.

Apart from the 5 trillion financial aid that will be distributed with little oversight (i.e. to the usual suspects), corona killed the Sanders movement or at least derailed it substantially. Now people are asking for survival — and want to remain at home (!) — instead of going out and demonstrating for social democratic corrections of the system.

Was this Corona Hysteria orchestrated?

How was COVID turned into a weapon against the Sanders movement? The ‘simulitis’ article from the Washington Post seems to have started a propaganda coup for the lockdown.  Presented with logic in itself — but without proof of applicability — the article tricked plenty into believing that for flattening the curve lockdown is a necessity. Meanwhile, the simulitis model is logic in and of itself, if this model is applicable to the present situation is an entirely different question. How does the virus spread in reality? The model is nice but it is just a model. If it maps current reality sufficiently well is another question.

If the whole COVID hysteria will turn out to have just been a panic without substantial underlying danger — and the chances are quite high for that — the movement against climate change will be put back for years. Scientific arguments demanding measures to prevent climate change will not be credible after «science» told us to go into lockdown for nothing and killed millions of jobs. That it was not science that ordered the lockdown but politicians listening to certain very questionable scientists with ties to big business will be rather irrelevant. The MAGAs who lost their jobs will not listen — understandably to a certain extent — as they were demonstrating and defending the constitution meanwhile the liberal leftists were — by following «science»  — sitting at home and watching the country go bankrupt.

Instead of forcing a surveillance state on the people, let the people ask for it. With COVID fear people will demand that everyone is tracked 24-7 and has his or her vaccination data implanted in order to be checked anywhere at any time. To use an airplane a scanner scans all your vaccination. If you don’t have the required one, you can’t fly. Period. The same goes for concerts, metros, jobs, etc. It’s not compulsory, it’s just necessary to join the society.

By knowing who has contact with whom — allegedly for tracking infection — the organizational structure, i.e. the participants of any political movement will be known in detail.  Imagine everyone Sanders spoke to for more than fifteen minutes and everyone that spoke to those that are around Sanders mapped minuscule details known to an organization that wants to undermine that movement …

So this little coronavirus ended socialist (social democratic) dreams, gives Wall Street et al. new cash they direly need, puts the climate movement back for years to the delight of the oil-industrial sector and starts the total surveillance state.

I think it’s time to start a war against this virus now!